The Canary Islands belong to Spain but lie a good deal south of mainland Spain and to the west of the coast of Africa! Given that they are in the middle of the Atlantic they can enjoy variable weather, but in general they are warmer than Europe and so have become a magnet for tourists. This means that the beach areas are nearly always buzzing with people but it is still possible to find considerably quieter areas inland.
All of these islands were at some point volcanic and if not entirely visible at sea level, then the volcanic history will soon become apparent as you climb towards their highest points.
In particular the island of Tenerife contains Spain’s highest peak El Teide – surpassing even those that lie within the Pyrenees and the second highest peak which sits in the Sierra Nevada, Mulhacen. 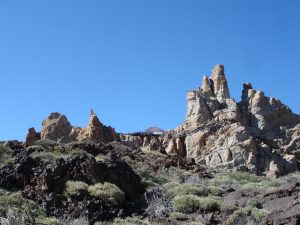 The walking on Tenerife can be very interesting and those with a penchant for these things may want to scale the heights of Teide to say that they have visited the highest point in Spain. although you will need a permit to do so – here. The climate will change dramatically along the way even if the sun continues to shine on the coast. Frequently the middle belt of the island is clad in cloud or mist and then the peak rises majestically above this in clear blue skies.
From hot, hot hot at the coast the air temperature will descend rapidly and your exposure to the suns rays will be intensified as the air thins at higher altitudes. In addition you will probably feel at least the early effects of altitude even if these do not greatly slow you down.
Accommodation is generally easy to find but should be booked well in advance. Prices are higher than in mainland Spain. Flights run from both the UK and the mainland. There is an excellent bus service across the island (see titsa.com).

Because of the prevailing weather which comes from the north-east, and the size of the mountains in Tenerife, there are several different walking areas on the island, each with its own distinctive characteristics. Coupled with the good motorway that stretches most of the way round the island, this means that you can enjoy a very varied walking holiday in Tenerife, choosing walks each day dependent upon the weather forecast for that day. Click on this link on this page to see a map of the various protected areas. 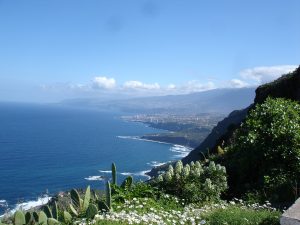 Here are some good walking sites for Tenerife – some of them also give you good opportunities to practise your Spanish!

The major long distance route in Tenerife is the GR131, which goes from La Esperanza (situated towards the NE of the island), south-west for 86 kilometers to Arona (situated towards the SW). It’s split into 5 stages, with stage 3 skirting the crater to the SE of Teide. Information about this route and PR routes on the island can be found on Red de Senderos de Tenerife.

Some of the local municipios produce brochures of local walks (senderos locales, marked with green and white markers). These brochures will be in Spanish and of varying quality. They may have a map with contours, but obviously not GPS coordinates. However, you can generally find a trail on wikiloc where someone has done that route, and download the GPS coordinates from there. For example:

The best walking map we’ve found that covers the whole island is the 1:50000 Tenerife Map produced by freytag & berndt. There are both Sunflower Books (2 books, one covering the north of the island, and one covering the south and the island of La Gomera) and Rother Walking Guides to Tenerife. Check out Traildino for suggestions of other maps and guide books for this area.